Did you know that propane gas has been used as a commercial fuel for over 80 years? It serves as the fuel for over 4 million vehicles around the world. After gasoline and diesel, propane is the third most popular engine fuel. More than 70% of domestic propane supplies are from natural gas refined in the United States; as a country, the United States produces enough propane to exceed customer demand! There are many reasons why it’s such a popular type of fuel, and why we’re making the switch for some of our vans here at Shipley Energy!

It has a high return on investment. 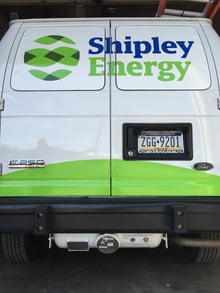 Propane autogas is approximately $1.00 less per gasoline gallon equivalent (GGE). For vehicles that convert, using propane autogas will allow the vehicle to gain 1-3 miles per gallon and have a longer engine life with lower maintenance costs. At Shipley Energy, we’re going to be converting some of our service vans to run on propane. If we converted all of our vans, we’ve projected that we could easily save over $8,000 in a year. If that’s savings for vans, imagine the savings for an entire fleet of trucks.

Bi-fuel engines allow the driver to run on either gasoline or propane. There’s an automatic sensor in the tank which will ensure that the vehicle is running on propane if there is propane in the tank. If the tank runs out of propane, it will switch over to gasoline. Similarly, if the propane tank is filled, it will switch back to propane. We are using a 24 gallon tank; that will get the van about 190 miles before it runs out.

The Department of Environmental Protection also offers grant money for making the switch which could easily cut the cost of the conversation in half.

There are more propane autogas refueling stations than any other alternative fuel. It is also the only alternative fuel with stations in every state with more public refueling stations opening every day. As you're filling your tank and the tank is full, the dispenser stops automatically just like a gasoline tank. It is also fast filling, taking only 2-4 minutes to fill depending on the size of the tank. The propane that is used as fuel is the same propane you can use to heat your home, to cook, and to heat your hot water.

There is no sacrifice in vehicle performance.

Propane autogas provides a similar range, horsepower, torque, and towing capacity to gasoline-powered vehicles. It also has a much higher octane (at 104) than gasoline (87) which is what guarantees its similar performance. It is also a much more versatile type of fuel than other alternate fuel types. It has been tested in temperatures ranging from -40 to 120°F and there has been no change in its performance. It’s a fuel type that can be used in virtually every environment and climate. 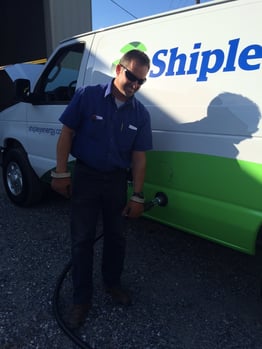 It’s better for the environment.

Switching to propane autogas gives you a less expensive, clean burning fuel that will increase the longevity of your vehicle. It will also reduce your carbon emissions and help lead to a better environment. We have been a supplier of propane for many years and regularly made deliveries to companies that are using propane as fuel, so it was time to start making the switch ourselves!